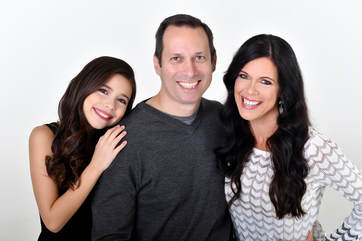 Starz Dance Galaxy is owned and operated by the husband and wife team of Jeanine Klem-Thomas and Philip Thomas. Their daughter Malia has been a student at SDG since she was just 2 years old, when they first made Starz their 2nd home!

Now as the owners since the fall of 2013, they have a very different set of talents and resources to draw on as they work to make Starz Dance Galaxy the very best environment for your child. As a dance studio, teaching the art of dance is an obvious priority, but our team hopes to offer so much more in helping all of our children grow into amazing young adults.

​Learn more about each of them below!

Jeanine Klem-Thomas kept the Orlando Magic Dancers at the top of their game for many years and under her direction, they were one of the most prestigious teams in the NBA consistently invited to perform in International Events (performing in over 20 different countries around the world) and recognized for their exemplary work on and off the court!

Currently entering her 28th season with the Orlando Magic as the Entertainment Teams Manager, she is excited to continue the new chapter in Orlando Magic Entertainment as she builds the newest teams in their program, 'The 407' co-ed hip-hop squad and the co-ed Sr. hip-hop team (ages 55+) called the 'Classic 407'.  She also continues to oversee the 'Magic Beatz' Drumline and Jr. Dance Camp programs!

Jeanine was born and raised in the entertainment industry as both of her parents were professional singers, her father played multiple instruments, and her mother was a professional Polynesian dancer! With entertainment in her blood, she began dance classes at the age of three and trained extensively in ballet, pointe, jazz, hip-hop, tap, and acro! Jeanine is a native Floridian and upon graduating from the Florida State University with a degree in Nutrition and Fitness, and after completing 3 years as a member of the nationally ranked FSU Golden Girls Dance Team, decided to move to Orlando when she was hired as an Orlando Magic Dancer in 1995. She spent three seasons on the team as a team member and captain and then began her Coaching career in 1998. During that time period, Jeanine also put her degree to good use in the fitness industry as the Events and Membership Sales Manager for RDV Sportsplex Athletic Club giving her invaluable sales, marketing, business and management experience.

Jeanine's credits and involvement in the dance, arts, entertainment and pageant industries are extensive!  She was a member of the Board of Directors for the prestigious Orlando Ballet for 3 years aiding in the long range development plan and fundraising for the Ballet and its schools. She proudly served as the Assistant Choreographer on 2 productions for the Orlando Opera, Salome and Carmina Burana where she was privileged to work alongside Debra Brown, a well known choreographer for Cirque du Soleil. As a performer she has worked as a Dancer for Universal Studios and numerous production companies, including the locally acclaimed Hardrive Productions, performing in events and industrials throughout Orlando and abroad. She worked on a National Commercial for the Lifetime Network and Gain Laundry Detergent, a project she worked on in the spring of 2014 under the direction of Pamela Bolling and Hardrive Productions. Jeanine worked for many years as a dance competition judge for Marching Auxiliaries (MA), Spirit Cheer/National Dance Force and the National Dance Alliance (the dance division of NCA) judging their regional and National dance competitions.  In addition to judging for the National Dance Alliance, Jeanine also served as a highly sought after dance instructor for their high school and college dance camp programs teaching numerous teams around the country! Looking for a way to fund her college studies, she became heavily involved in the scholarship based pageant industry during her Sr. year of high school and held the titles of Volusia County's Jr. Miss, Miss Daytona Beach, and Miss Azalea! After graduating from college debt free by utilizing her pageant scholarships, Jeanine served as the choreographer for the Miss Florida America Production for two years and the show director for the Miss Daytona Beach America pageant for 3 years as a way to give back to an industry that provides so many amazing growth opportunities to young women. Her sport dance career also includes serving as the creator and coach of the WNBA's Orlando Miracle M-Squad, a co-ed hip-hop team, and as a consultant to the WNBA's Connecticut Sun on the creation and development of their dance team. She has modeled for the Surf Expo, Liz's and Bebe's on Park on Ave and even Hawaiian Tropic as a Jr. Model in her younger days!

Jeanine credits her lifelong passion for dance and the discipline she learned in her childhood studio for all of her success in and out of the dance industry!  She thrives on cultivating amazing young dancers with positive attitudes, a healthy self image, confidence, a focus on their academics, strong work ethics, a belief in the importance of teamwork and who believe they can conquer anything they set their minds to!  She enthusiastically brings her experiences, resources and background to the operation of SDG!  Although Jeanine can't be at the studio every day during the NBA Season, she is always working diligently behind the scenes with her husband and the staff to make SDG the best studio environment for all of the Dancers who call SDG home!

CLICK HERE for a feature story from 2010 on Ms Jeanine and her lengthy career with the Orlando Magic.

Phil Thomas holds a degree in Biochemistry and has been a business owner for many years.  What you will not find on Mr. Phil's resume is anything that says dance, anywhere! For proof of this simply stop in during bring your parent to dance week or check him out in the Dancing Dads routine during the annual recital and you will wonder if Mr. Phil has danced a day in his life.

However, the women in his life, Ms. Jeanine and their daughter Malia, both live for dance and Mr. Phil is passionate about seeing them live their dreams.  Mr. Phil contributes all of the non-dance talent needed to keep things humming along.  From building websites to helping the after school kids with their homework Mr. Phil fills in the gaps to make Starz Dance Galaxy the perfect place for young dancers to grow and young students to be successful in school.

His vision is to build the best place for his daughter to grow up and help provide that same experience for as many other children as he can.  After years of working as a manager and business owner in other industries Mr Phil now finds his purpose in making a difference in the lives of young people preparing them to make a difference in the world as they become young adults.